On Wednesday 27th September Year 6 had a visit from Nurse Brendan Bradley. Brendan talked to the children about his work in Downpatrick Hospital. He showed them how to perform CPR and also how to place a person in the recovery position. The children loved dressing up in the surgical masks and gloves which they were able to keep at the end of the session.

​ Everyone, including me, had their temperature taken. The children listened to their heartbeat through the stethoscopes. I also had my blood pressure taken- this wasn't high but just right! Everyone enjoyed Brendan's visit and this was evident in the children's 'Thank-you' letters.

There are also a lot more Year 6 pupils aspiring to be nurses or doctors. (That's no bad thing for the NHS!)

I would just like to take this opportunity to thank Brendan for his visit which proved to be very educational and great fun!

Monday 23rd October
Year 6 went for their first 'Shared Education' session in St. Michael's Primary School. They had great fun with maths and in particular Izak 9. 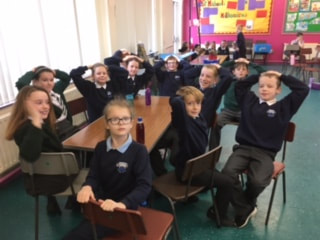 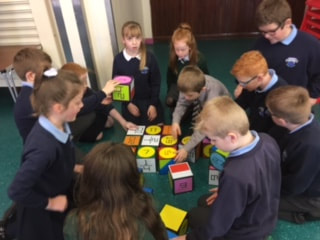 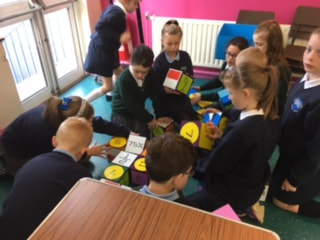 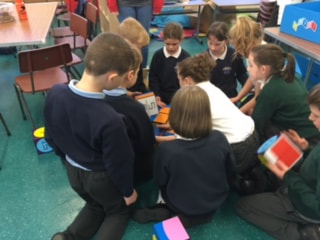 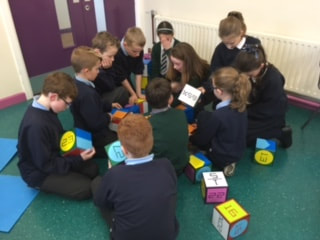 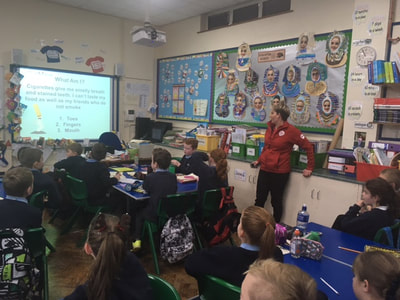 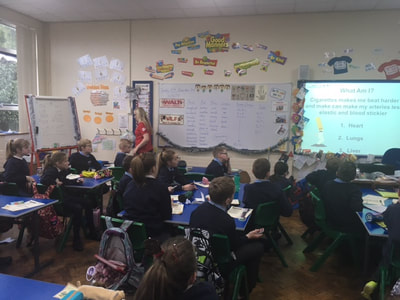 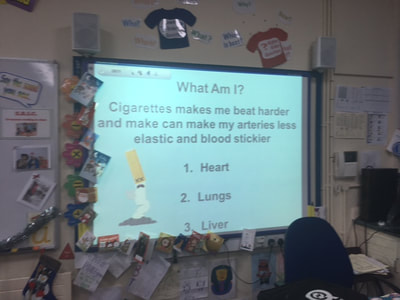 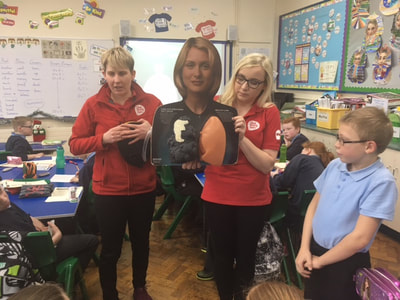 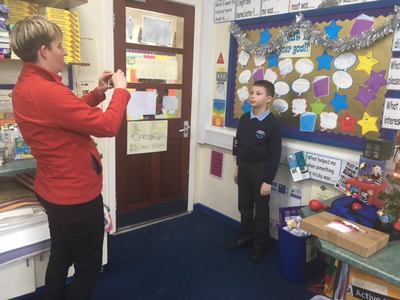 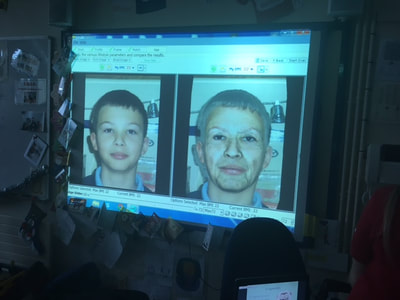 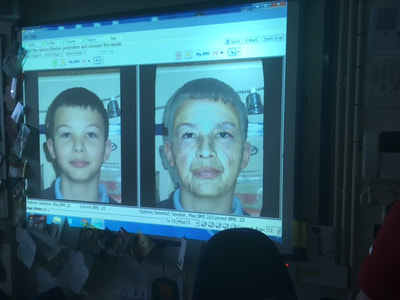 January has been a busy physical month for Year 6. We have started rugby every Monday morning with Mr. Owens from Ulster Rugby and on Tuesday afternoons we take part in circuit training with Jake our 'Galaxy' coach. (Photos to follow).

The children have finished their topic about ancient Egypt and have worked hard at tests. We have started our next topic- 'Flight' and will be having some interesting visitors in connection to this in February. We shall also visit the Ulster Aviation Society hangars at the Maze. This will be most probably after Easter as it is too cold to visit any sooner.

On 11th April we went on our visit to 'The Ulster Aviation Society' at the Maze. The children thoroughly enjoyed the visit as they were able to get in and out of planes and helicopters something that I can't provide in the classroom. As usual the guides from the society did a fantastic job and made the trip both informative, educational and fun! A big thank-you from Dromara PS and incidentally the guides were very complimentary about the children's behaviour.

Year 6 had Ernie Cromie from the Ulster Aviation Society to visit. He brought an excellent model of Orville and Wilbur Wright getting ready for the first flight at Dayton, Ohio in 1903.

Ernie also told the children about Harry Ferguson, Lillian Bland (one of the first women in the world to design, build and fly an aircraft who lived in Carnmoney, north of Belfast with her aunt) and James Martin (the engineer from Crossgar who invented the ejector seat.)

Ernie answered many of the children's questions about the work he does with the 'Ulster Aviation Society.' He also explained the difference between flying helicopters and fixed wing aeroplanes.

I would like to thank Ernie for his time- his talk was, as usual, very informative and it was a pleasure to have such a gentleman in our classroom!

Year 6 had a very busy May- with a Rugby tournament on May 4th in Dromore Rugby Club. You can read about that on the 'News' page of the website, thanks to Chloe Heanen. I was so proud of the whole class and the way they played- coming second was a great result. Thanks also to Mr. McConaghy (Principal of Dromore High School) for the lovely food for pupils and staff and Kristian our coach for all his hard work.

May was also a month for tests so it was heads down and hard work all the way. We did have fun though with Year 6 helping me celebrate a big birthday. The netball girls attended a tournament on 23rd run by St. Michael's Primary School's Mrs. Malone. It was held in Banbridge Leisure Centre and we had a great morning with the 'B' team gaining experience and the 'A' team winning the tournament.

We also had Sportathon on 25th May which was a glorious sunny day. The children had fun, we raised much needed funds for the school and everyone had an ice lolly at the end to cool down.

Our big trip was on Monday 4th June to the Giant's Causeway and Portrush. The weather was very kind to us and we had a great day learning about the myths surrounding the Giant's Causeway and also the true geological causes. The highlight of the day was Barry's Portrush, of course. The children had a ball and were so well behaved- even members of the public commented! I would like to thank Jade and Melissa for their help- it was much appreciated. 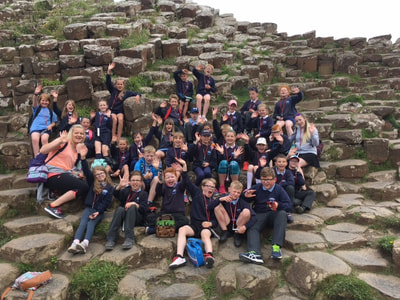 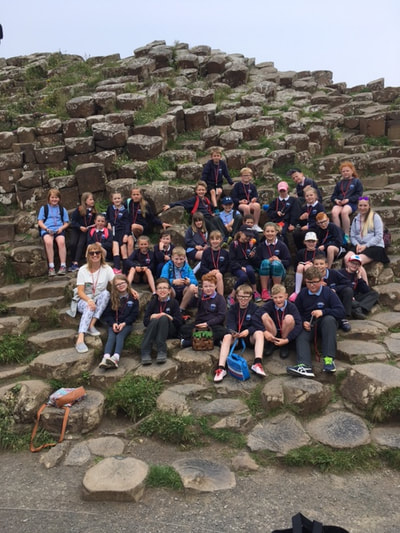 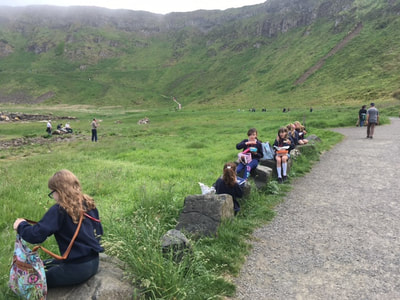 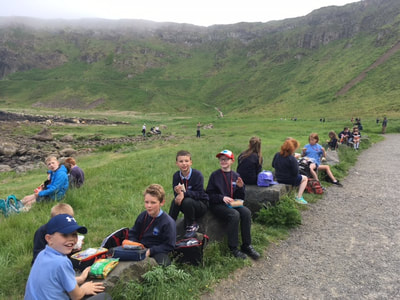 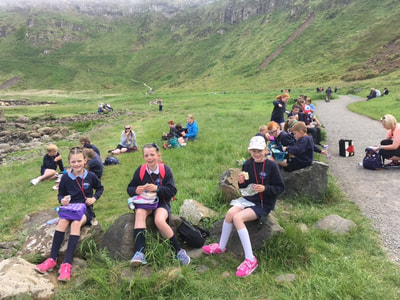 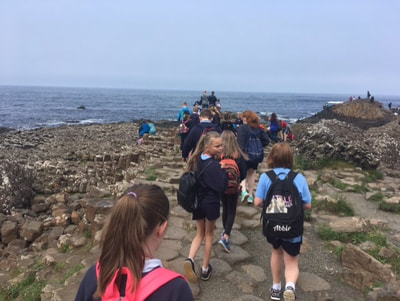 The week beginning the 11th June was a very sporty week for Year 6. Netball, hockey, football tournaments and sports day in which Year 6 were all involved. Fantastic play in the netball- the 'B' team held their own against many Year 7 teams. The hockey was also a learning experience for Year 6- bring on hockey in Year 7! The football team was made up of Year 6 and Year 7 players and again Year 6 gained experience for their turn in Year 7.

It has been a pleasure to teach Year 6 this year- yes it was a big class and hard work but we have had fun and great learning. Thanks to the parents for all their help and support this year. Remember, school is a three way process- pupils, parents and school must all be involved.

Finally, have a great, safe summer and hopefully the weather will be kind!
Powered by