Hello everyone and welcome to Year 6. I would like to start with some photos and information about my last educational trip in June with the previous Year 6.

This trip was to 'Fish City' in Ballynahinch. We were kindly invited by the owners- Mr and Mrs Lavery to experience a talk about sustainable fishing and also to be able to handle and study many types of fish. As you can see from the photos the children had a great time and I would like to thank Mr and Mrs Lavery for the beautiful lunch (fish of course) they provided. We all had a great time and you never know Year 6 may get invited this year- I hope so! 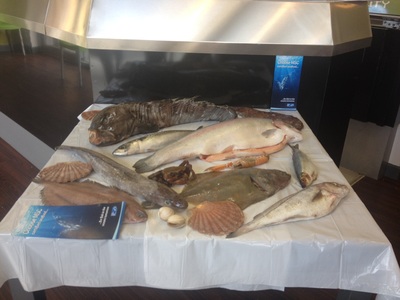 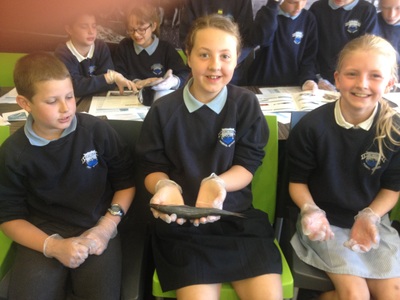 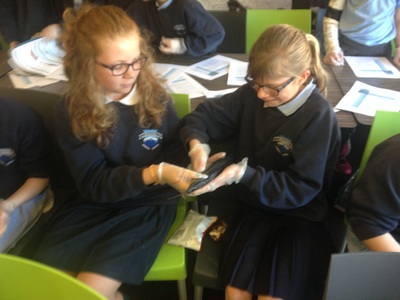 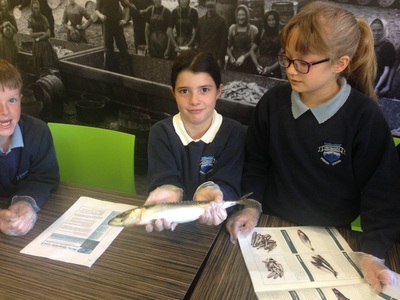 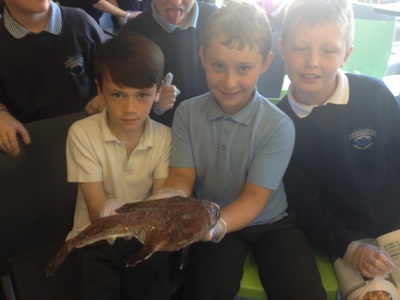 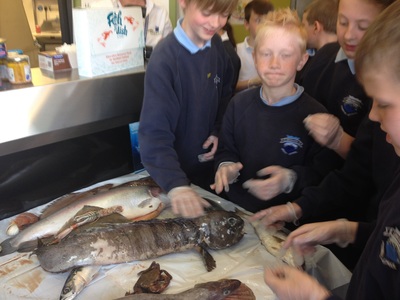 Now for some information about this term. Don't we all look well? 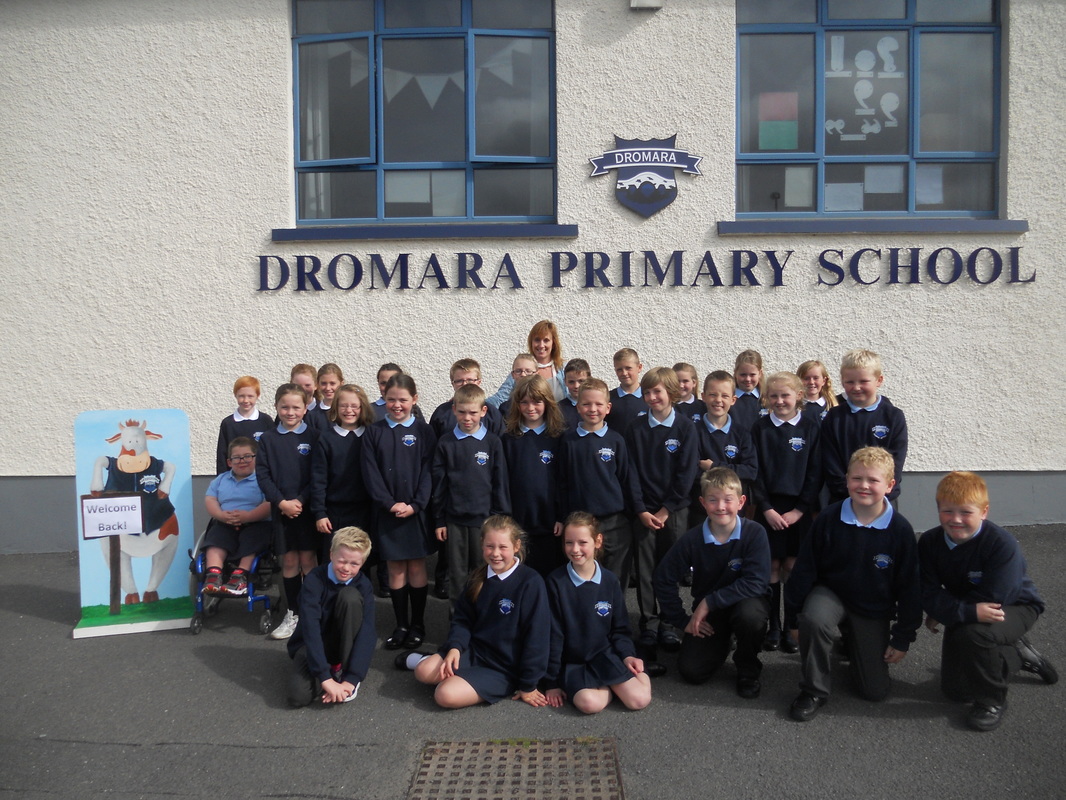 I would first like to welcome three new children to the class- Ben Black, Hannah Murphy and Josh Murphy. I hope they enjoy their time in Dromara Primary School and learn lots and lots.

Our first topic this term is 'The Human Body' We shall be having a talk from Josh and Hannah Murphy's dad about a condition called spondyloepimetaphyseal Dysplasia and I have invited Brendan Bradley, Callum's dad, who is a nurse to give us a talk about various aspects of his job.

After half term we shall begin our 'Egyptian' topic. So look out for photos on the website about our visit to 'The Ulster Museum' and also when David Palmer gives us his 'Egyptian' talk. Remember if any parents have any information regarding topics and feel they could help out please don't hesitate to contact me. I would be very grateful.
On Wednesday 23rd September we welcomed Nurse Brendan Bradley to our class. He gave the children an excellent talk above his job as a nurse and introduced them to taking blood pressure, listening to heart beats by stethoscope, performing CPR to 'Nelly The Elephant' and studying various dressings and syringes. It was very informative and the children had great fun (as you can see from the photos.) I would like to thank Brendan for his help and encourage him to apply to be a school nurse! 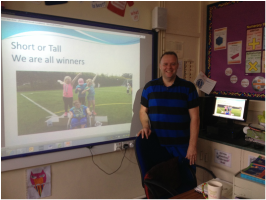 On Tuesday 20th October Mr Paul Murphy (Josh and Hannah's dad) visited our classroom with an excellent powerpoint telling us more about Josh's condition and also 'little people' in general.

The children listened very carefully and learnt a lot about 'Spondyloepimetaphyseal Dysplasia'- they asked intelligent questions and Mr. Murphy's powerpoint was both informative and entertaining I would like to thank Mr. Murphy for his time and effort- the children and I were very interested in this subject which is now so close to all our hearts.
November 2015

This month we shall begin our 'Egyptian' topic. I plan to introduce the children to many of the Egyptian gods, Pharaohs, pyramid building and general life in Ancient Egypt.

In December we shall have a talk about a modern day visit to the pyramids. Our trip to the Ulster Museum will not be until January and I'm sure by that time Year 6 will be able to teach the historians a thing or two about Egypt!
Rich Black

We had a visit from Rich Black (Ben's dad) who has been a pilot for Aer Lingus. Rich started his talk with the day to day work of a pilot. The children were surprised with the amount of preparation needed before a flight can take place.

Rich then took the children on a journey around the aircraft, looking at the wheels, the fan, the engine, the tail, the rudder, the cargo hold, the wings and of course the cockpit. The captain sits on the left and the first officer sits on the right. The side stick is used to fly the plane and the rudder pedals are operated by the pilot's feet. When the aeroplane is on the ground controlling the aeroplane is different and the pilots have to use mini steering wheels at each side of the cockpit.

​Rich also showed the position of the autopilot in the cockpit. Lots of new words and technical terms were used- HUD- heads up display, altitude, radar, landing gear etc. The pilots have to speak to many people before take-off - the engineers, loaders, refuelers, ground crew, dispatcher and cabin crew.We learnt that the petrol tanks are inside the wings of the aeroplanes. This helps the distribution of the 'weight'.

How does an aeroplane fly?

Rich showed us excellent diagrams connected to the above. The children loved the videos of take off and landing and indeed the whole lecture was super- very informative! I would like to thank Rich for his time and effort- the little gliders were great too.
Ernie Cromie- 22/02/16.

Ernie began with a talk about Lilian Bland- first women in the world to fly a plane- which happened in Co. Antrim. He also talked about "The Ulster Aviation Society" and how they are an educational charity to help us in Northern Ireland remember the history of aviation. Ernie had lots of information about 'Spitfires.' The children were amazed to hear that a Spitfire crashed on the top of Slieve Croob!

The children asked lots of questions and also gave very sensible answers to the questions Ernie asked. He also told the children some of the history of 'Shorts Brothers and Harlands' and that Harland and Wolff actually built planes. Harry Ferguson of course was also mentioned. Ernie showed the children a drawing of the first aircraft Harry designed. He designed 8 in all and managed to fly his aircraft before the end of 1908 which was his goal. James Martin, who was born near Crossgar was the man responsible for the 'ejection seat'. In all 7,500 military personell were saved by this wonderful invention.

Thanks to Ernie for his time and expertise- we all look forward to visiting him at the Ulster Aviation Society's hangar at the Maze on 21st of March. 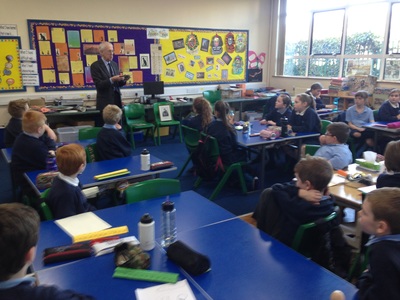 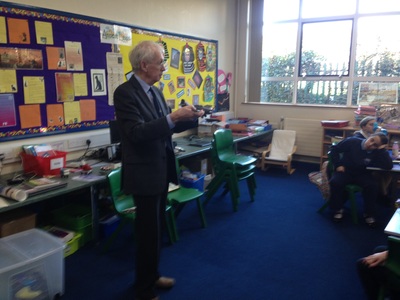 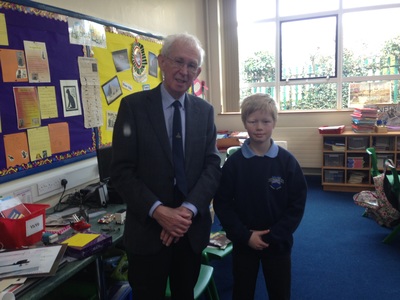 On Monday 21st March Year 6 visited 'The Ulster Aviation Society's' hanger at the Maze. We had a great time with the highlights being:
Our guides - all the members of the society - were fantastic. I know the children and parents who accompanied us had a fantastic experience. I would like to thank Ernie Cromie from the Society for all his help and I know he praised my Year 6 for their great behaviour, their sensible questions and confident, accurate answers. 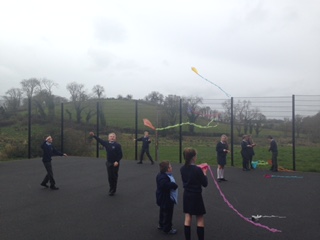 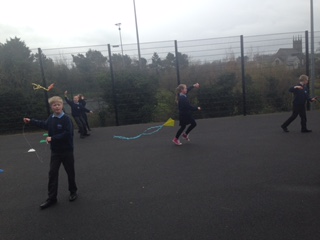 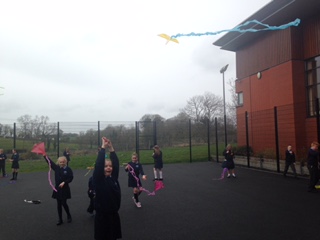 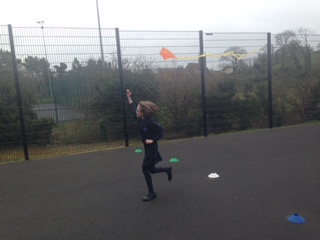 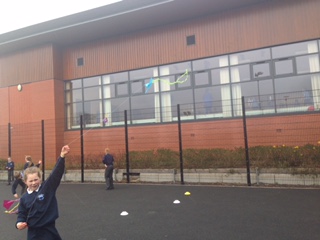 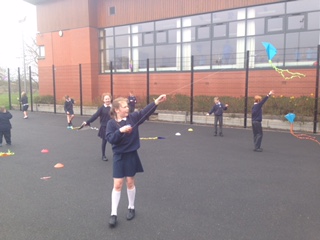 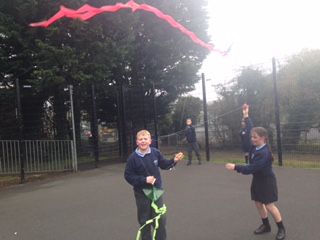 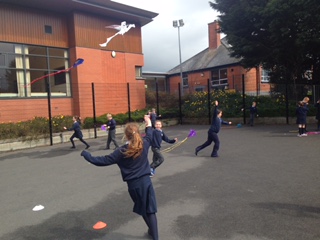 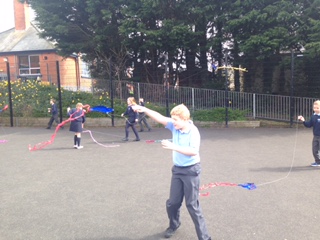 Year 6 made and flew kites to finish their 'Flight' Topic.

During April and May we studies 'Irish Myths and Legends.' The children listened to many stories including those connected to Finn McCool. They have learnt about Banshees, Pookas, Leprechauns and Faeries to name but a few.

We finished this topic with a trip to 'The Giant's Causeway'- Finn's hand. Have a look at our photos- we had great fun, especially when we went to Barry's. I would like to thank the parent helpers- Claire Black, Moyna MacNally and Paul Murphy who gave up their time as we did not arrive back to school until 6:45. Sorry we were late- traffic and flooding did not help!

During June we shall study mini-topics on Water and China. As well as keeping an eye on the European Football Championships- we have a busy month!
Powered by